88.9k
President Trump's historic summit with Kim Jong-un in Singapore was somewhat overshadowed by the tumultuous climax of the G7 summit in Quebec. America's closest allies are still reeling from the divisive summit and shortly after it ended, Trump lambasted Canadian Prime Minister Justin Trudeau in a barage of tweets. That was in response to a news conference held by Trudeau where he vowed retaliatory action against U.S. tariffs on steel and aluminum. Trump called Tudeau "very dishonest and weak" and claimed he "acts hurt when called out", comments that have infuriated Canadians. The Globe and Mail newspaper called Trump's outburst "one of the most flagrant manufactured crises ever perpetrated by an American administration against an ally".

With the dust showing no signs of settling any time soon, it makes sense to take a quick look at whether Canada has any leverage in a potential trade war. The Canadian government has often talked up the fact that Canada is the most important trading partner for 35 U.S. states but despite that, there are only two states where trade exceeds 10 percent of economic output. On the other hand, Canadian provinces have always been reliant on U.S. trade - 49 percent of Ontario's GDP depends on it. That figure is 31 percent for Alberta and 23 percent for Quebec.

Nevertheless, the U.S. could still suffer economically in any trade war and it is entirely possible that some states could start seeing ripple effects on their employment rates. Last year, website canadianbusiness.com took a look at government figures from both countries to determine how many U.S. jobs depend on trade with Canada by state. The analysis found that some 9 million jobs in total are reliant on cross-border trade with California (1.66 million), New York (680,900) and Florida (620,000) having the most at stake. Even if President Trump continues with his protectionist stance on trade with his most important allies, the U.S. certainly won't be immune from retaliation. 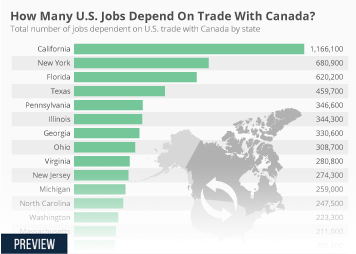 This chart shows the total number of jobs dependent on U.S. trade with Canada by state.