88.9k
Last week, somebody shopping in Venezuela would have literally needed a wheelbarrow full of cash to purchase some basic items at the supermarket. Runaway hyperinflation made the country's currency, the bolívar, practically worthless. In July, inflation reached 82,700 percent with commerce becoming difficult, bordering on impossible. The situation prompted Venezuelan authorities to devalue the currency 95 percent by removing five zeros from the old bolívar. Essentially, the old "strong bolívar" has now been replaced by a new currency called the "sovereign bolívar". That means that in Caracas for example, the price of a cup of coffee has gone from 2.5 million strong bolívars to 25 sovereign bolívars.

President Nicolás Maduro has said that the measure should halt hyperinflation and he boasted that the country will experience an economic miracle, though ordinary Venezuelans are far from convinced. A recent survey found that 90 percent of the population lives in poverty with 60 percent saying they wake up hungry because they are unable to purchase food. The following infographic shows just how bad the situation got prior to the launch of the new banknotes on Monday. Buying 2.4 kg of chicken would require 14.6 million worth of old bolívars which is equivalent to $2.22. Physically, that amount of cash equates to two stacks of 1,000 bolívar notes 73 cm tall and weighing as much as 14.6 1kg bags of sugar.

1kg of cheese worth $1.14 would have cost 7.5 million bolívars while a roll of toilet paper would have cost 2.6 million, according to Reuters. Earlier this week, Caracas came to a standstill amid the roll out of the new currency with businesses closing and workers staying at home. An "economic miracle" is certainly far from people's minds right now with the country remaining paralyzed by uncertainty and the IMF warning that the inflation rate could exceed 1,000,000 percent this year. 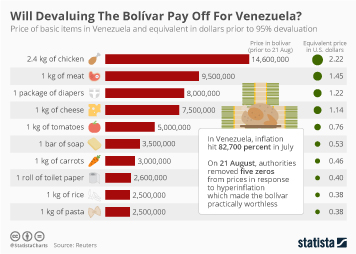 This chart shows the price of basic items in Venezuela and equivalent in dollars prior to 95% devaluation.