Skip to main content
53k
74.6k
87k
88.9k
These days, there’s a lot of talk in the marketing world about Millennials, i.e. the first generation of digital natives born between the early 1980s and early 2000s. But while Millennials, who are often described as hedonistic and consumption-oriented, are an interesting group to target, the Generation X should not be forgotten. After all, those born between the mid-60s and early 80s are the ones with the highest average incomes in the United States.

Interestingly, marketing to Gen Xers requires a totally different approach than targeting Millennials, who practically live their entire lives online. According to a poll conducted by YouGov on behalf of MarketingCharts, TV ads and word-of-mouth are the most important purchase influencers for Generation Xers, beating any type of paid online advertising by a significant margin. 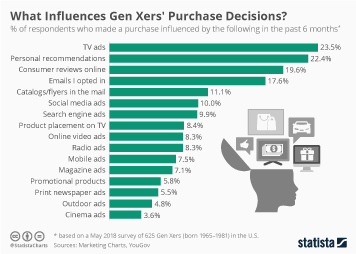 This chart shows what influences purchase decisions of Americans born between 1965 and 1981.