88.9k
Today is National Burrito Day and restaurants across the U.S. are celebrating by giving out free food to customers or offering special deals.

Burrito lovers certainly have their favorite styles and secret spots they frequent. But when it comes to the biggest chains selling burritos and Tex-Mex food, Americans have voted with their feet (and wallets). Taco Bell was the best-selling chain in 2017, with almost US$9.8 billion in sales, followed by Chipotle, which sold burritos, tacos and bowls for approximately US$4.5 billion.

The two biggest chains are way ahead of their competition, according to trade magazine QSR. El Pollo Loco, which ranked third and sells chicken as well as Tex-Mex stables, only made US$842 million in sales in 2017.

Further research showed that for many Americans of the Millennial generation, more than one day of every week is Burrito Day. In a survey by Moe’s Southwest Grill, 72 percent of Millennials said that they ate two to three burritos every week, compared to 90 percent of Generation X respondents saying they ate one burrito a week on average. A 2019 YouGov survey meanwhile found that Mexican was the second most favorite ethnic cuisine in America, liked by 86 percent of respondents. Only Italian was more popular, with 88 percent of Americans saying they liked it. 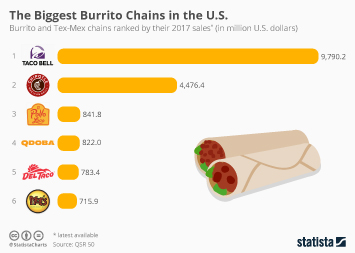 This chart shows the best-selling burrito and Tex-Mex restaurants in the U.S.