88.9k
While for Western cultures December is often seen as the time for merrymaking and to reflect upon the past 12 months, in Japan it is all about forgetting them. Japanese year-end gatherings, so-called bônenkai, literally translate to “forget-the-year parties” and can be seen as the Far Eastern equivalent of office Christmas parties popular in Europe or Northern America. Traditionally, people of all ages and from various kinds of groups get together to say farewell to the woes of the past months, while clinking their glasses together for a favorable upcoming year.

Originating in 15th century Japan, the primary intention of bônenkai was to express gratitude, however, the modern year-end parties in Japan describe a casually aligned drinking event among friends or co-workers. While bônenkai appear to serve the light-hearted purpose of letting one’s hair down before getting back to business in the new year, social implications root much deeper in contemporary Japanese society.

The country’s social structure is tightly defined by hierarchical parameters, often preventing people from speaking freely. Such events provide an atmosphere where people feel encouraged to be more candid under the tongue-loosening power of alcohol and the silent agreement that anything said or done will be forgotten the next day. However, for supervisors or seniors it is a unique chance to listen closely to the frank feedback voiced by their employees or juniors and trying to actively act to improve their situation in the coming year.

Considering the profound impact bônenkai can stimulate, it is no surprise that according to a survey conducted by the online portal Gurunavi, intentions of attending year-end parties are overwhelmingly high among Japanese. Only about ten percent of respondents reported to not participate in private bônenkai this year, while 21.5 percent intended to decline invitations to company-organized events. 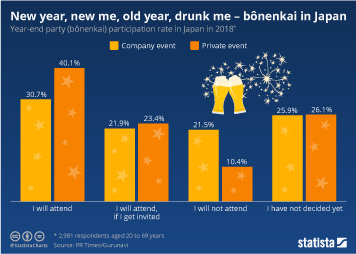 This chart shows the year-end party (bōnenkai) participation rate in Japan in 2018.