The alcoholic beverage industry is a major segment of the beverage manufacturing industry in Japan. Renowned for its manufacturing of high-quality rice wine (sake), the industry covers a broad spectrum of fermented and distilled drinks. While sake and Japanese clear liquor (shochu) have a long history in the country, the procedures of beer and whisky manufacturing began in the last centuries. However, despite its short commercial history in Japan, the beer industry is one of the largest within the domestic liquor market. Along with liqueur, the brewed beverage makes up around half of alcoholic beverage sales, relegating sake and shochu to a secondary position.

The Japanese liquor manufacturing industry is dominated by the presence of large holding companies established as beer breweries a century ago. Since their founding, Asahi Group Holdings, Kirin Holdings Company, and Sapporo Holdings have expanded their portfolios to include other liquors such as beer-like beverages, whisky, and liqueurs. Initially a producer and wholesaler of wine, Suntory Holdings joined the competitive beer and distilled liquor markets, which remained a major business segment of the company. Sustained by the beverage manufacturing business, the market leaders extended their reaches through acquisitions and business ventures, doubling as the largest companies in the Japanese foodstuff sector.
To compete with the diversified business strategies at large-scale enterprises, smaller ventures built their core product lines and focused on establishing their signature flavors. Leading distilleries in shochu manufacturing have been continuing business operations for several decades, successfully defending their positions against new market entrants. Furthermore, following relaxations of tax laws on production of beer and beer-like beverages, microbreweries challenged the balance in the Japanese beer market. While the major breweries forced the lion’s share of businesses out of the competition, successful ventures were mainly continued as side businesses.

Alcoholic beverages play a significant role in social and business lives in Japan, with liquor consumed at social gatherings, and business meetings with colleagues and customers. Drinking parties (nomikai) with coworkers, fellow students or friends are recurring social events in Japan. The most elaborated ones are typically held in December towards the end of the year. The significance of so called bonenkai is to forget all the troubles of the past year through the consumption of alcoholic beverages.
Even though drinking parties have become commonplace in Japan, frequent liquor consumption is not necessarily a common habit. Trends in production and sales have been showing a gradual decline in recent years. A shift towards a health-conscious lifestyle among young adults, coupled with gradual consumption and liquor tax hikes have been impacting the alcoholic beverage industry. Stricter penalties for driving under the influence have further effected a change among drivers. To cater to consumers turning away from alcohol, major breweries introduced their lines of non-alcoholic beers, which was considered a healthy alternative for frequent beer consumption.
This text provides general information. Statista assumes no liability for the information given being complete or correct. Due to varying update cycles, statistics can display more up-to-date data than referenced in the text.
Published by C. Diep, Apr 13, 2022

Market share of soft drinks in Japan 2021, by category

At home drinking frequency in Japan 2022 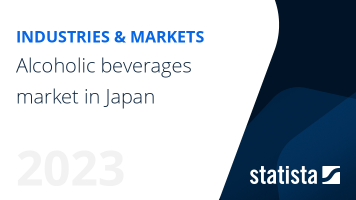 The most important key figures provide you with a compact summary of the topic of "Alcoholic beverages market in Japan" and take you straight to the corresponding statistics.