88.9k
When Tesla broke ground on its first factory in China last week, some people were questioning the timing of the company’s expansion to the country. Amid trade tensions, a general economic slowdown and cooling consumer confidence, the Chinese automobile market contracted by 2.8 percent in 2018, marking the first annual decline in more than two decades. As China’s Association of Automobile Manufacturers (CAAM) reported on Monday, the production and sale of automobiles amounted to 27.8 and 28.1 million units, respectively, last year, following six consecutive months of declining sales.

But then again, it’s a very specific segment of the market that Tesla is after, and looking at electric vehicle sales paints and entirely different picture. According to CAAM, sales of new energy vehicles, as plug-in electric vehicles and plug-in hybrids are referred to in China, grew by more than 60 percent last year, reaching 1.26 million units. According to Tesla CEO Elon Musk, the Shanghai-based Gigafactory will produce lower-cost versions of the Model 3/Y specifically targeted at the Chinese market. “Affordable cars must be made on same continent as customers”, Musk wrote on Twitter, not to mention that a production plant in China could shield his company’s Chinese ambitions against tariffs and other import duties.

As the following chart shows, the Chinese market for electric cars is more than three times the size of its U.S. counterpart, illustrating why it makes sense for Tesla to double down on its ambitions in what is still the world’s largest automobile market. 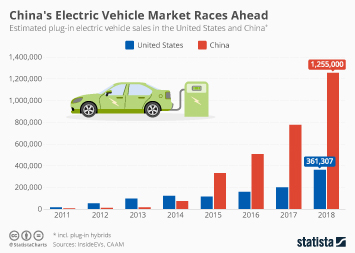 This chart shows electric vehicles sales in the United States and China.