88.9k
With her suggestion of raising the marginal tax rate on income over $10 million to 70 percent, Rep. Alexandria Ocasio-Cortez sparked a lively debate about whether taxing the rich much heavier than they currently are would a) be the fair thing to do and b) be beneficial to the United States.

While proponents of the radical plan argue that it could help deal with rampant income inequality and fund initiatives such as universal health care and a shift to renewable energy as laid out in the Green New Deal, others think that the proposed plan would create disincentives to effort and most likely lead to an increase in tax evasion. Asked about the 70 percent tax plan in an interview earlier this month, Bill Gates, formerly the richest person in the world, made another interesting point saying that “you wouldn’t want to just focus on the ordinary income rate, because people who are wealthy have a rounding error of ordinary income”, suggesting that the estate tax and taxes on capital would be more effective in collecting more taxes from the ultra-wealthy.

Interestingly, the general public is quite open to the idea of a higher marginal tax rate or a so-called wealth tax. Economists, however, are skeptical of the effectiveness of such measures, at least with respect to the proposed 70 percent marginal tax rate. According to the bi-annual survey of members of the National Association for Business Economics (NABE), just 17 percent of the economists polled think that the proposal would have a positive net impact on the country, while 42 percent think the net effect would be negative. One third of the respondents thinks the result of such a measure could go either way, depending on how the added tax receipts would be used. 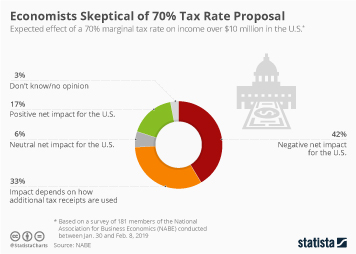 This chart shows the net effect of a 70% marginal tax rate on income over $10 million in the U.S. as expected by economists.