G7 finance ministers reached a historic deal on corporation tax at the weekend which will see all seven countries endorsing a minimum rate of 15 percent. The agreement comes after yet another case of a company paying zero tax that raised serious questions. That involved an Irish subsidiary of Microsoft, called Microsoft Round Island One, making a whopping $315 billion profit last year but paying no tax on it as it was resident in Bermuda for tax purposes. That sum is equal to nearly three quarters of Irish GDP and it comes from a company that does not have employees. Such financial reports are becoming increasingly common. In May of this year, Amazon reported €44 billion in revenue for the previous year in Europe but according to its corporate filings in Luxembourg, its unit there made a €1.2 billion loss and no corporate tax was paid.

Such cases added urgency to the G7 negotations and the deal is expected to see companies pay a minimum 15 percent rate regardless of where their headquarters is located. It will also aim to close loopholes and force some of the largest multinationals and tech giants such as Amazon and Microsoft, to pay taxes where they sell their goods and services, regardless of whether they are physically present in certain countries. The OECD estimates that the proposals could generate up to $80 billion in additional tax revenue a year, though the final figure will depend on the finer points of the agreement.

French finance minister Bruno Le Maire described the agreement as a "a starting point" and he pledged that “in the coming months we will fight to ensure that this minimum corporate tax rate is as high as possible”. There is still a lot of work to do and support will need to be drummed up among the G20 nations who will meet in Italy next month while the wider negotiations will involve 139 countries. Nevertheless, the weekend's events are a major step towards change. Considering the implications for tax havens and multinationals alike, how do corporate tax rates look in 2021?

This infographic uses OECD data to show the basic central government statutory (flat or top marginal) corporate income tax rate in a selection of countries. In the United States, the corporate tax rate was lowered from 35 percent to 21 percent in 2018, though President Biden has suggested raising it to 28 percent. He recently offered to drop that proposal in exchange for Republican support in pushing through his infrastructure deal. Elsewhere, Ireland still has its infamously low 12.5 percent corporate tax rate which has led Google, Facebook and other tech giants to establish their European headquarters in Dublin. 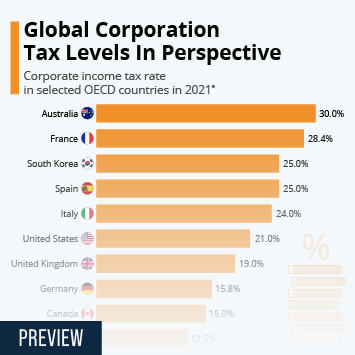