88.9k
Across the United States, 93.3 million people were obese in 2015-2016 while 36.6 percent of the country's adults consumed fast food on a given day according to the Centers for Disease Control and Prevention. A new study published in the Journal of the Academy of Nutrition and Dietetics has now found that the size of calorie account of fast food has been increasing steadily since the mid-1980s.

The researchers studied 1,787 mains, sides and desserts at 10 popular fast food chains from 1986 to 2016. The restaurants involved were Arby’s, Burger King, Carl’s Jr., Dairy Queen, Hardee’s, Jack in the Box, KFC, Long John Silver’s, McDonald’s and Wendy’s. Although many fast food establishments are trying to tempt more customers with lighter and healthier items like salad, the average main increased in weight by 39 grams across those ten chains between 1986 and 2016. During the same period, the calorie count also went up by 90. Sides also increased in size, though not as much, during the same time frame. Their average weight increased by four grams while the calorie count grew from 175 to 217.

The average portion-size of desserts grew in weight by 71 grams while the number of calories grew by 186. Menu options also grew hugely over the past three decades with the number of mains, sides and desserts growing by 226 percent. While the study's authors welcomes requirements for fast food restaurants to display calorie content, they also recommended several proposals to improve the situation even further. They included more promotion of healthy eating and the option of offering smaller portions at reduced prices. 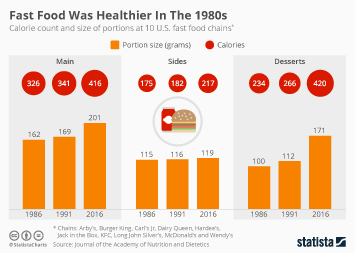 This chart shows the calorie count and size of portions at 10 U.S. fast food restaurants.