88.9k
Bicycle helmets are certainly controversial. While they are undoubtedly vital to the safety of cyclists, many people refuse to wear them for a multitude of reasons. Some claim that a helmet messes up their hair, others think it looks uncool, a sizeable share just think it's uncomfortable and then there is moaning that a helmet is difficult to transport. J.D. from hit comedy series Scrubs famously solved his problems by buying a hairmet. When asked what it was he said that "actually, it's not a helmet, it's a hairmet - it has extra room so you don't mess up your hairdo".

In most cities worldwide, the sight of a cyclist weaving in and out of traffic with headphones and no helmet is unfortunately pretty common. However, some countries have actually moved to make helmet laws compulsory for bicycle users. Examples are few and far between but as of 2019, helmets must be worn in Australia, New Zealand, Namibia and Argentina, according to a map from stuff.nz. Elsewhere, legislation is not as clear. For example, children must wear helmets in France and Sweden. In Canada, helmets are mandatory in Newfoundland and Labrador while in the United States, laws vary hugely. No states have introduced mandatory-wearing laws but 21 have made helmets obligatory for children. 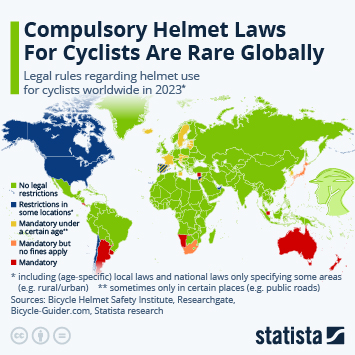 This chart shows legal rules regarding helmet-use for cyclists wordwide in 2019.