Skip to main content
53k
74.6k
87k
88.9k
World Press Freedom celebrates and advocates for a world with a freer press, an important reminder at a time where the media broadly and journalists specifically are increasingly under attack around the world. Most recently, Lyra McKee a journalist in Derry, Northern Ireland, was murdered last Thursday, while Jamal Khashoggi, a Washington Post reporter, was assassinated by a team of Saudi security and forensic officials.

According to legal reviews from Freedominfo.org, many formal freedoms of information laws are relatively new. Freedom of information laws allow people to petition their government to release documents, gaining access to official information that they public may not otherwise know about. While 119 countries currently have laws on the book, about 90 countries only adopted laws within he past 19 years.

Sweden is the country with the oldest FOI legal regime, with a 1766 law that gives Swedes the right to gain government documents. Other countries did not start catching up to Sweden until the middle of the 20th century, with the U.S., France, Japan, Israel, Colombia, and 22 other countries all adopting FOI regimes during the last century. Recent additions to the list include, Russia, Switzerland, Germany, Mexico, and Argentina. While many countries have adopted freedom of information laws, the efficacy of those laws to actually gain information from governments differs based on the strength of legal institutions. 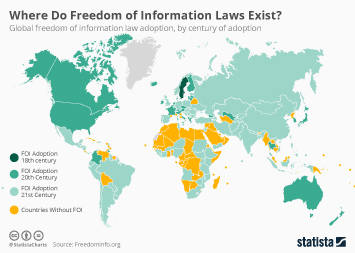 This chart shows the global freedom of information law adoption, by century of adoption.