Published by
Julia Stoll,
Mar 18, 2019
Instead of what used to be journalists, newspapers, TV and radio stations, nowadays there are hundreds of thousands of news sources available. In these times of media abundance, "fake news" and "lying press", overall trust in the media has recently been a subject of intense scrutiny. According to a survey conducted in 2015 by the European Commission, only 19 percent of European respondents had high trust in the media. A similar questionnaire found that the country with the most trust in the news was Finland. 62 percent of respondents stated they trusted news organizations and journalists. In terms of gender distribution, women considered news more credible than men did.
Though the use of social media as a news source is growing, as is the case in Denmark, it is still considered the least trustworthy. It was found, for example, that only roughly a third of French individuals aged 18 to 24 years have trusted information posted on social media networks, whereas online news websites were far ahead as far as public trust in the French media was concerned. 36 percent of Dutch respondents surveyed would even pay for online news; roughly two thirds would do this based on the web content’s quality.

In general, as demonstrated in the survey by the European Commission mentioned above, Europeans still trust traditional media the most. Similar results are also found in other European countries such as Italy, where radio and television ranked highest as the most reliable media.

In the following 5 chapters, you will quickly find the 31 most important statistics relating to "Trust in media in Europe".

The most important key figures provide you with a compact summary of the topic of "Trust in media in Europe" and take you straight to the corresponding statistics.

News in the United States

Social media usage in the UK 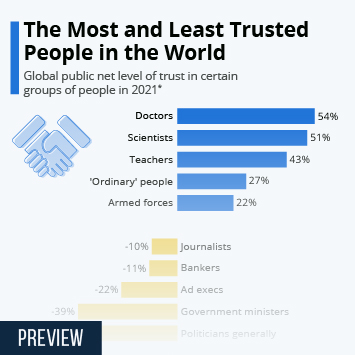