Russian President Vladimir Putin's attempt to weaken his own office and in return strengthen that of the prime minister and the parliament was met with resistance Wednesday, when the Russian government resigned. Putin has played a game of musical chairs since 1999, switching between the role of prime minister and president to avoid term limits. In 2024, he is once again reaching the end of the line as president. His new proposals include stricter term and residency limits and are seen as an attempt to weaken his possible successor.

Yet, almost no European democracies have term limits for their heads of government. Meanwhile, they are quite common in the Americas and Asia. What seems unfair is really a symptom of different styles of government.

European heads of government, like UK Prime Minister Theresa May or German chancellor Angela Merkel, are typically not heads of state. That function is served in many European countries by a ceremonial president, who does stick to a term-limit, or in fewer cases by a monarch, also with exclusively ceremonial powers. Prime ministers and chancellors are also not elected directly and are therefore dependent on upholding a majority in their respective parliaments or throw in the towel. It is also expected that prime ministers and chancellors can face multiple reelections on short notice in the case of a government dissolving or withdrawing support for its leader. Term limits therefore would be hard to formulate, while toppling a leader remains rather easy. Neither of those characteristics apply to U.S. presidents or their counterparts in Asia and Latin America, bringing in term limits as an additional safeguard for leaders who are heads of state and heads of government at the same time.

France is the exception in Europe, with President Emmanuel Macron running the country and government to a large degree. In Russia, which has a similar system of shared executive power in place, is in the same position when it comes to term limits. China, finally, removed term limits for President Xi Jinping in 2018, while none are put on the prime minister either. The most valuable office in China, Secretary of the Communist Party (also held by Xi), has had no term limits since 2017. 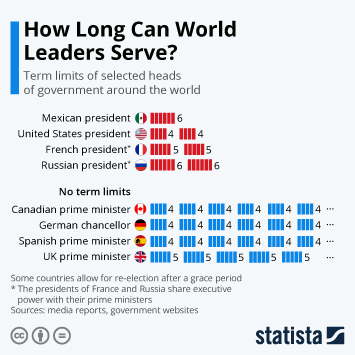 This chart shows the term limits of selected heads of government around the world.