Angela Merkel’s reign is coming to an end after 16 years in office as the German chancellor. The 67-year-old is no longer the German conservative party’s candidate to head a new government after the September 26 elections, the usual procedure for a chancellor completing a fourth term.

During her time in office, Merkel became known as one of the most powerful and influential women on the planet. At the national level, she distinguished herself by stoic leadership and firm crisis management while leaving room for public opinion. She steered the country through the financial crisis of 2008, the Fukushima disaster in 2011 (including its repercussions for atomic energy stronghold Germany) and the 2020 COVID-19 pandemic as well as her government’s decision to welcome more than one million refugees to Germany in 2015.

During her long career, Angela Merkel – or Mutti (“mommy”) as the Germans call her - has seen many world leaders come and go. At the helm since 2005, she has been a peer to four American and four French presidents as well as five British and eight Italian prime ministers (one of whom, Silvio Berlusconi, even had two separate terms).

Only the Japanese were able to match the musical chairs at the top of the Italian government. Eight Japanese premiers made their introductions to Angela Merkel (and she to them), also including one returning one, Shinzo Abe. Abe had the longest consecutive term of any Japanese prime minister opposite Merkel between 2012 and 2020. This beats the longest consecutive term for an Italian prime minister of around 3.5 years, but also means that the Japanese were changing their prime ministers in even quicker succession during the rest of the time.

Fewer different faces greeted Merkel as the top politicians in India and China. Manmohan Singh shared 8.5 years in office with Merkel from 2005 to 2014. Narendra Modi and the German longtime chancellor are going on 7.5 years of shared time in office come September. While Modi’s reelection is coming up in 2024, another one of Merkel’s familiar faces, Chinese president Xi Jinping, already made provisions to extend his reign for longer. Xi has served opposite Merkel since 2013 – longer than any other world leader in the analysis – and since term limits for Chinese presidents were abolished in 2018, he is now bound to see the chancellors pass him by for a change. 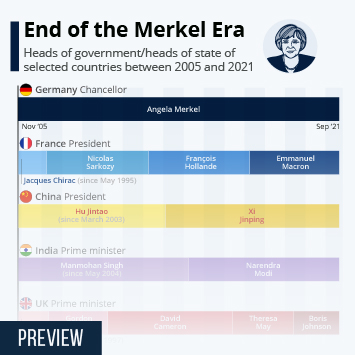 This chart shows the heads of government/heads of state of selected countries between 2005 and 2021.