Beyond Meat shares are down more than 10 percent this week after investment bank Oppenheimer gave the stock a Market Perform rating with little upside potential at the current valuation.

While looking “quite favorably upon the Beyond Meat brand, product assortment, track record of innovation, longer-term prospects, and positioning to the very on-trend alternative meat category,” Oppenheimer analyst Rupesh Parikh also cited “a pricey valuation, increasing competition, and the potential for new selling pressures following the expiration of the lock-up” as warning signs for the near term.

Since its widely followed IPO in May, Beyond Meat has been on a rollercoaster ride, seeing its share price soar 840 percent above its IPO price by July and subsequently drop 69 percent to yesterday’s 30-week low. Aside from its valuation of $4.5 billion, which is high considering the company’s revenue of $200 million through the first nine months of 2019, Beyond Meat has some things going for it. According to Barclays estimates from earlier this year, meat substitutes could become a $140 billion market by 2029, and if the company is able to land a big fish such as McDonald's or KFC, both of which have been testing its products, that could catapult its sales into new spheres.

However, the success of Beyond Meat and Impossible Meats has attracted the attention of industry heavyweights such as Nestlé and Tyson Foods, who both went to market with their own alternative meat products this year. 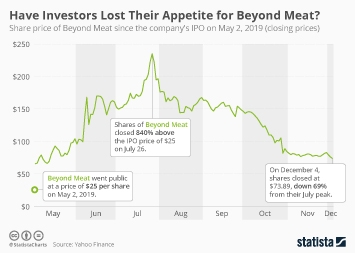 This chart shows the share price of Beyond Meat since the company's IPO on May 2, 2019.