In the past, many cultures considered meat a luxury that could only be enjoyed on special occasions or certain days of the week, while today it is a staple that can be found in nearly all restaurants and many kitchens all over the world. The market value of the meat industry is expected to rise from 897.5 billion U.S. dollars in 2021 to over 1.3 trillion dollars by 2027. In 2021, the United States saw the highest revenue from meat products and sausages, nearly twice as much as the second largest meat market in the world, Germany with a created revenue of over 28 billion U.S. dollars. Russia, France, and Brazil are finishing the top five countries with the biggest revenue from processed meats.

As the demand for meat rises worldwide, so must the production of meat. Most of the world’s meat is produced in Asia, which generated about 135 million metric tons of meat. Pork and poultry are the most widely produced types of meat, with sheep being the least produced. Although many people abstain from pork for nutritional or religious reasons, pork is widely produced in China and Europe. Some of the largest meat production companies in the world include Tyson, Hormel Foods, and Pilgrim's Pride.

The projected per capita meat consumption is expected to remain steady at around 43 kilograms of meat per year until 2031. However, as the global population continues to climb, the overall consumption of meat is expected to rise steadily in the upcoming years. Additionally, red meat is expected to see a slight increase in consumption in the United States in the next decade.
This text provides general information. Statista assumes no liability for the information given being complete or correct. Due to varying update cycles, statistics can display more up-to-date data than referenced in the text.

Worldwide revenue of the meat products & sausages market by country 2021

Top exporters of beef worldwide in 2021 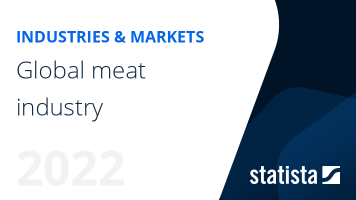 The most important key figures provide you with a compact summary of the topic of "Global meat industry " and take you straight to the corresponding statistics.