88.9k
As meat consumption is increasingly scrutinized for ethical reasons and its possible environmental impact, plant-based alternatives to meat are poised to be more than just a flash in the pan. Following the strong IPO of alternative meat maker Beyond Meat, which saw its share price more than double on its first trading day in early May, analysts at Barclays are predicting that the global market for animal-free meat substitutes could grow more than tenfold over the next decade and potentially reach $140 billion by 2029.

“Although today we believe that there are inherent barriers to successfully replicating certain animal-based consumer favorites (e.g. t-bone steaks), what has been achieved so far in terms of “meatless” ground beef, sausage and hamburger products has yielded positive initial consumer reaction, which should bode well for the alternative meat sector to grab its fair share of the global meat market”, Barclays writes, predicting that plant-based alternatives could grab 10 percent of the $1.4 trillion meat market by 2029. To achieve that, Barclays notes that makers of alternative meats need to expand beyond their natural target group and “appeal to the group that drives meat consumption: 14- to 70-year-old males”.

Just last week, Bloomberg reported that Impossible Foods, one of the largest competitors of the aforementioned Beyond Meat, is struggling to keep up with demand as partnering burger chains White Castle and Red Robin ran out of Impossible’s popular meat-free burger patties amid the roll-out of a newly formed partnership with Burger King. Both Impossible Foods and Beyond Meat are pioneers in mimicking meat at the molecular level using plant-based proteins and nutrients. Competition in the meat alternatives market is heating up though, with major players such as Tyson Foods and Nestle introducing their own plant-based meat alternatives. 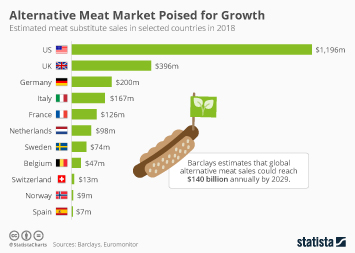