After two failed launch attempts in August and September, NASA's Artemis 1 mission finally took flight towards the moon yesterday. The flyby is scheduled to be the start to a new program of U.S. government lunar missions almost exactly fifty years after the Apollo project, which landed the first humans on the moon, ended. Since then, no manned missions have visited Earth’s closest companion in space.

Artemis 1 is the first of three missions that are aiming to put a person back on the moon by 2025. Not only in the U.S., race for the moon is starting anew as several more countries and private companies have announced lunar missions. After the successful landings of Chinese probes Chang'e 3 in 2013, Chang'e 4 in January 2019 and Chang'e 5 in 2020, who will be the next space agency or company succeeding in reaching the moon? Our graphic gives a rundown of the main lunar missions announced to-date. Given the uncertainties of space flight, the dates may be subject to change.

After two failed mission by the Israeli private company SpaceIL in April 2019 and the Indian space agency ISRO in July of that year, the next soft landing on the moon is scheduled by Japanese company iSpace. The launch of its Hakuto lander is planned later this year, which will place the Rashid rover developed by the United Arab Emirates Space Agency on the moon in early 2023. U.S. companies Astrobotic Technology and Intuitive Machines are looking to bring landers and rovers to the moon towards in early 2023 as part of NASA's Commercial Lunar Payload Services program that has been giving out contracts to companies to develop capabilities to fly to the moon's South pole which is interesting for resources utilization.

Amidst global upheaval following Russia's invasion of Ukraine, the country's first launch from its resurrected moon program Luna is believed to have been delayed to the coming year at least. The lander mission was originally scheduled to be followed up by a orbiter in 2024 and a manned mission to the moon's orbit in 2029. The space agencies of Japan and India are also reaching for the moon in 2023 with one lander mission each. Turkey wants to reach the moon as well that year, albeit with an easier impactor mission. A soft landing is scheduled to follow by 2028.

New launches from China and the European Space agency are expected in 2024 and 2025, respectively, and focus on resources utilization concepts, as does NASA's Viper rover program that will be realized in cooperation with private companies starting in 2024. In addition, NASA and ESA are scheduled to begin work on a space station in lunar orbit the same year.

South Korea already got a head start for its lunar program with the successful launch of a lunar orbiter in early August which is currently on the way to the moon. The country wants to achieve a soft landing on the moon by 2030. 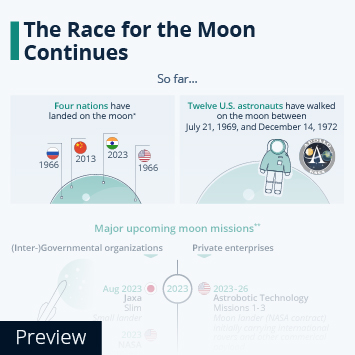 This chart shows upcoming moon missions as of November 2022 as well as facts and figures on the exploration of the moon.