Skip to main content
53k
74.6k
87k
88.9k
IHS Markit announced yesterday that their U.S. Flash PMI (Purchasing Managers Index) had left growth territory and showed a reading below 50, which is signaling contraction for the sector.

The PMI for the U.S. was 49.9 for the month of August, IHS Markit said in a press release. This is the first time a contraction reading appeared since 2009, when the country was still recovering from a recession.

Yet, other components of the economy are looking better than they should in the light of an upcoming recession, for example job growth, wage growth and U.S. GDP growth. Some observers have also pointed out that the current inversion of the yield curve in the U.S. is tied to the long period of near zero interest rates around the world, which is causing a rush towards U.S. investments (where there are positive interest rates). They argue that this is what has been pulling down those yields, causing a warped picture of the yield spread not fit as an indicator. 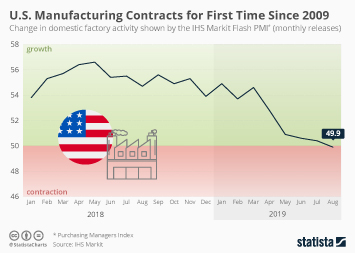