40k
57k
41k
9.6k
The U.S. economy is currently in great shape. Unemployment is historically low, wages are high and GDP growth has beaten most of the world’s leading economies for some time now. To top it off, 76 percent of S&P 500 companies who reported their first quarter earnings by mid-May beat average earnings per share estimates.

But some clouds are gathering on the horizon. As the trade war with China drags on and President Trump looks determined to open another front by imposing tariffs on Mexican imports, economists are increasingly worried that the tariffs could drive up consumer prices, stifle demand and weigh on corporate investment. Aside from the uncertainty associated with the ongoing trade disputes, there’s one more ominous sign though, signaling that the current expansion (which is also the longest since World War II) might soon be coming to an end: the U.S. treasury yield curve, which has been growing more inverted and reached its widest level since 2007 on Monday.

The yield curve shows how much it costs the federal government to borrow money for a given amount of time, revealing the relationship between long- and short-term interest rates. It usually slopes upward, meaning that the yield for people buying government bonds is higher the longer their money is tied up, reflecting the fact that long-term investors bear a higher risk. If the yield for bonds with short maturity exceeds the yield for longer-term bonds, this is called an inverted or partially inverted yield curve, which is what we’re currently seeing. On Aug 5, the yield on 10-year Treasury bonds closed at 1.75 percent, the lowest it has been since October 2016. Meanwhile a 30-day Treasury bond is yielding 2.07 percent, meaning that short-term lenders receive a higher yield than those tying up their money for 10 years.

So what does that mean? “The term spread—the difference between long-term and short-term interest rates—is a strikingly accurate predictor of future economic activity”, Michael D. Bauer and Thomas M. Mertens found in a 2018 Federal Reserve research paper, adding that “every U.S. recession in the past 60 years was preceded by a negative term spread, that is, an inverted yield curve”.

In plain terms, the curve is inverting because more people are trying to invest their money in long-term bonds, thereby lowering those bonds' yields. They are presumably doing so because they want to lock in long-term yields to tide them over a period of losses (a recession) since they fear that the market will not be offering them feasible short-term investment options anymore.

The New York Fed in June translated a -0.23 percent spread to a 30 percent risk of a recession occurring within the next 12 months, which is substantial but far from a certainty. The current spread is standing at -0.25 percent. Some observers have pointed out that the current inversion of the yield curve is tied to the long period of near zero interest rates around the world, which is pulling down yields and therefore showing a warped picture of the yield spread not fit as an indicator. 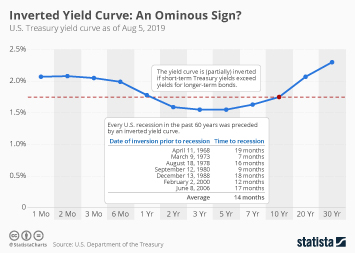