53k
74.6k
87k
88.9k
Earlier this month the IMF released a report, finding that putting a $75 per ton carbon tax in place by 2030 would cause average global energy prices from coal to increase by 214 percent. Out of all the countries the IMF assessed, France’s power bill from coal would rise the least, increasing by a mere 123 percent. Argentina was the country that would see its energy bill from coal rise the most under this plan and timeframe, growing by nearly 300 percent.

Other energy sources saw a much wider range in the uptick in energy prices. The IMF estimates that France would only have a two percent increase in its electricity bill, while globally electricity prices would rise by nearly 20 times that rate. Gasoline had the smallest increase in energy prices and the tightest range in prices. Since other types of energy, like natural gas, electricity, and gasoline, emit less CO2, the carbon tax would cause less movement in energy prices, even under a high tax scenario.

A carbon tax is a financial penalty a government and an intergovernmental body can put in place to disincentive types of energy that release a lot of carbon dioxide in the air, which is a greenhouse gas that's correlated with a warming effect in the atmosphere. The IMF found a carbon tax of $75 per ton of carbon would need to be instituted by 2030 around the world and, particularly, in countries that are major emitters to limit warming above 2 degrees Celsius. Under that scheme, countries, and businesses relying on high carbon energy sources, like coal, would see the biggest increase in their energy bills. 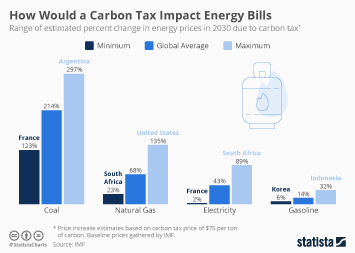 This chart shows the range of estimated percent change in energy prices in 2030 due to carbon tax.