The novel coronavirus outbreak has inspired people to search for the movie Contagion, a nine-year-old film directed by Steven Soderbergh about a flu pandemic. As noted by Buzzfeed News, Contagion was the 270th most-watched Warner Bros. film in December. By March, after the coronavirus swept the world—killing at least 3,300 people and infecting more than 97,000 globally—it became the second most-watched.

The spike was measured through the index on Google Trends. It doesn’t show the number of searches, but instead shows the peak popularityof a term. Google then ranks the search on a scale from 1 to 100.

By March, after the first coronavirus cases reached the U.S. and Americans had died from the virus, searches for “Contagion movie” peaked at 100, the highest mark on Google’s index.

The first coronavirus cases documented were in Wuhan, China in December. The following month, thousands had contracted the coronavirus, asevere acute respiratory disease also known as COVID-19. Now, the coronavirus has been recorded on every continent except Antarctica. 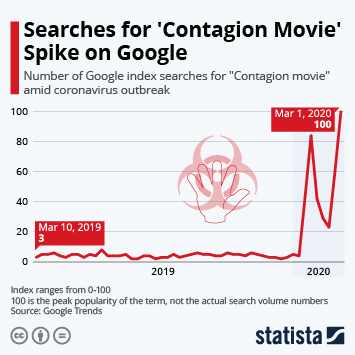 The chart shows the number of Google index searches for "Contagion movie" amid coronavirus outbreak.