Published by
Lai Lin Thomala,
Sep 13, 2022
A SARS-like virus, coronavirus SARS-CoV-2 (formally known as 2019-nCoV) spread around the globe since its outbreak in Wuhan city in China. As of the time of writing, about 411,000 people in Greater China had contracted the coronavirus. Globally, the virus has infected about 178 million people so far and caused around 6.1 million deaths. The COVID-19 pandemic has severely affected the economy of the "world's factory".

How did the outbreak start?

In early December in 2019, the first cases were identified from patients with severe pneumonia in the hospitals in Wuhan - the capital city of Huber province. The Huanan Seafood Wholesale Market in Wuhan has been widely considered the starting point of the outbreak. According to the early analysis of The Lancet, around half of 99 surveyed patients had a history of exposure to the market.

Like other coronaviruses (CoV), such as SARS and MERS which can mutate and spread from animals to humans, severe acute respiratory syndrome coronavirus 2 (SARS-CoV-2) can cause fever, respiratory infections, pneumonia, multi-organ failure, and even death in severe cases. The elderly and those with pre-existing chronic health conditions, such as lung or heart disease and diabetes, are the vulnerable and high-risk groups.

The coronavirus timeline and government measures

To combat the virus, the Chinese government announced a series of measures in late January 2020, including the cancellation of all Chinese New Year celebrations and a strict nationwide lockdown. On February 3, 2020, the 25,000-square-meter Huoshenshan Hospital was built swiftly with a capacity of 1,000 beds to expand the hospital capacity in the epicenter.

On March 11, 2020, the World Health Organization officially declared the novel coronavirus a pandemic. A week later, the Chinese government reported no new domestic transmissions for the first time. On March 31, 2020, the National Health Commission (NHC) announced that it would begin reporting the infection number of symptom-free individuals who tested positive for coronavirus. After no new deaths reported for first time, China lifted the ten-week lockdown on Wuhan on April 8, 2020. Daily life was returned slowly in the country with a few small outbreaks. With a swift launch of tracing, testing, and community lockdown strategies, most outbreaks were quickly under control in 2021. However, the strict lockdown measures in some cities have led to a rare public outcry over food shortages among residents.

While many countries are learning to live with the virus, China has maintained a "zero-COVID" strategy, using mass testing and lockdowns to shut down any transmission routes. With new cases hitting two-year high, several cities like Shanghai and Shenzhen announced a strict citywide lockdown in February and March 2022. Given increasing containment costs and constant disruptions of China's supply chains, the more infectious Omicron variant has undoubtedly posted challenges on the country's economy reboot.

When it comes to vaccination, China is one of the earliest countries which have rolled out a national immunization program. The Chinese government and private institutions have also invested heavily - about 1.4 billion U.S. dollars - in developing vaccines, therapy, and tests. As of September 2020, 11 COVID-19 vaccines developed by domestic drugmakers have begun clinical trials. China approved four such vaccines for public use and a fifth for smaller-scale emergency use in 2021 Spring. Official media announced that China's locally developed mRNA vaccine, ARCoV, might start Phase III clinical trial around early May. As of early March 2022, the country had exported about 1.7 billion doses of its homegrown vaccines to 117 countries and territories.

What are the economic impacts?

The rapid spread of the disease has impacted global business and tourism. International companies, such as Apple, Tesla, and IKEA, shut down their operations in the country during the early local outbreak. With more travel restrictions imposed inside and outside of China, numerous bookings of flights, hotels, and tours have been canceled. Although many companies had been back to normal operation, consumer spending remained weak. The pandemic impact on China’s trade and various industries across the world have been unprecedented, resulting in a plunge in China's GDP growth rate in 2020 - the lowest point over the last decade.

For further information about the coronavirus (COVID-19) pandemic, please visit our dedicated Facts and Figures page and our Trend Whitepaper.

In the following 5 chapters, you will quickly find the 32 most important statistics relating to "Coronavirus COVID-19 in China".

The most important key figures provide you with a compact summary of the topic of "Coronavirus COVID-19 in China" and take you straight to the corresponding statistics.

State of health in China 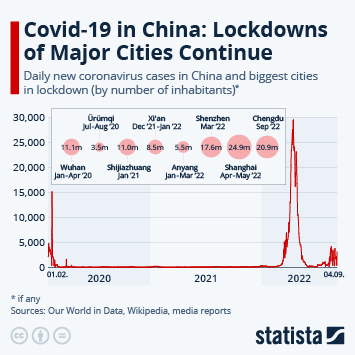 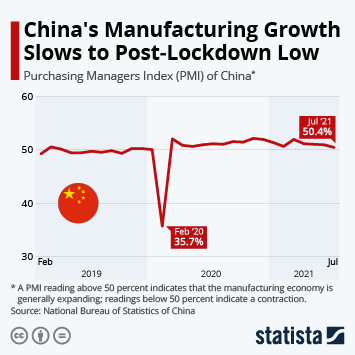