Five French-made Rafale fighter jets have touched down in India, providing the Indian Air Force with a major boost amid an ongoing border dispute with China. India has been attempting to modernize its fighter jet fleet in recent years and it signed a deal with France for 36 Rafales in 2016. It is expected to take two years until the jets are fully operational, however, when at least 18 are expected to be in service.

India operates a highly diverse fleet of fighter aircraft including the indigenous Tejas, Russian SU-30MKI, MIG-29 and MIG-21, the French Mirage 2000 and the joint French-UK SEPECAT Jaguar. Some observers have criticized the need for so many different jets which complicates interoperability, training and logistical requirements.

Despite the success of the India deal, the Rafale is still trailing its major European competitors in sales. Along with India and France, the jet is also in service with Egypt and Qatar. By comparison, Sweden's Saab JAS 39 Gripen is being used by Brazil, South Africa, Czechia, Hungary and Thailand along with the Swedish Air Force. The Eurofighter Typhoon is the European fighter jet with the most customers so far, however, used by Austria, Italy, Germany, the UK, Spain, Saudi Arabia, Oman, Kuwait and Qatar. 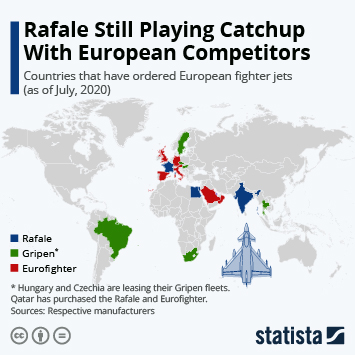 This chart shows countries that have ordered European fighter jets (as of July, 2020).