If Netflix is one of the companies better suited to the special circumstances created by the COVID-19 pandemic, Disney is certainly at the other end of that spectrum. With theme parks and resorts closed, cruises suspended, and movie theaters shuttered for months, the media and entertainment giant from Burbank, California has been hit on multiple fronts by the ongoing crisis.

Taking all these adverse effects into account, Disney estimates the impact of COVID-19 on its operating profit for fiscal 2020 at $7.4 billion, with the Parks, Experiences and Products segment alone taking a $6.9 billion hit. As the following chart shows, revenue in the segment that includes Disney’s parks, resorts and cruises, as well as its retail and product licensing business dropped by 37 percent in the twelve months ended October 3, with sales falling by much more than that in the second half of Disney's fiscal year. Studio Entertainment was also heavily impacted by the pandemic due to widespread theater closures.

Meanwhile Disney’s direct-to-consumer business, including Disney+, ESPN+ and Hulu may have profited from the special circumstances as people were forced to stay at home. Less than 12 months after its launch, Disney+ has already reached 73 million paid subscribers, illustrating the pull of Disney's vast content library. "The real bright spot has been our direct-to-consumer business, which is key to the future of our company," CEO Bob Chapek said. 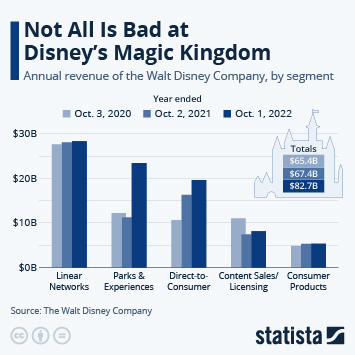