Sea Limited out of Singapore has been hotly tipped as the next tech giant from Asia. This week, the company won one out of four digital-only banking licenses given out in a first by its home state. The digital banking foray will see Sea go head-to-head with its rival, fintech and delivery startup Grab, which will also start a digital bank in cooperation with telecommunications firm Singtel.

Sea Ltd. has been expanding rapidly and was able to increase sales in all of its business areas in the second quarter of 2020. $716 million – more than half of total revenue - was generated in the digital entertainment segment, including its subsidiary Garena, which focuses on gaming and eSports. E-commerce wasn’t far behind at approximately $511 million in revenue. Financial services is as of now only making up a small fraction of sales, but one that is growing fast.

Some stock market experts view Sea as the Tencent and Alibaba of Southeast Asia. For others, however, the company's success is just a product of the soon-to-be-burst tech bubble. Bloomberg identified Sea Ltd. as the world’s best-performing large-cap stock in August when shares had gained almost 900 percent in the 18 months prior (since Feb 1, 2019). Between August and December, gains did not let up, placing the increase in value now at a whopping 1,177 percent.

Sea is therefore performing well above the level of big names like Apple and Tesla by showing the largest increase of any company with a market value of one billion US dollars when it went public. Sea is outperforming the two largest banks in Southeast Asia and is the largest company in the region with a market cap of around $97 billion. However, the company's revenue is still well below that of the region’s biggest companies.

In e-commerce, Sea’s Shopee platform has already overtaken its Chinese counterpart Alibaba as the top provider for online shopping in Southeast Asia. CEO Forrest Li says he has learned a lot from Alibaba, but ultimately doesn't want to remain just a “mini version” of great tech role models. The founder and CEO's net worth is estimated at around $7.5 billion. 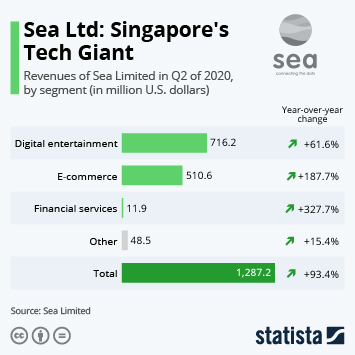