When Apple surprisingly announced its first pair of wireless over-ear headphones last week, the initial reaction was almost exactly the same wherever you looked: wow, these things are expensive. At $549, the AirPods Max seemed outlandishly pricey, even for Apple’s admittedly high standards.

And while the price remains very high for what are still consumer headphones, as opposed to studio headphones used by professionals that can easily set you back $1,000+, the initial outrage quickly made way for another reaction: what if these things are so good that the price is justified?

Early hands-on reviews have been overwhelmingly positive, lauding the AirPods’ build quality, noise cancelling and overall sound. In line with those reactions, delivery times for the headphones quickly went up on Apple’s website, with those willing to spend $549 on a pair of headphones now having to wait up to three months to do so.

As the following chart shows, Apple did take a gamble on the AirPods Max’s price. At $549, they are priced at the highest end of the high-end headphone market, with viable alternatives available for almost half the price. Considering that the original AirPods became a huge success after initially being met with a similar mix of outrage and ridicule, Apple could end up being right again this time. Either they just set the new bar for how expensive headphones may be or they overplayed their hand this time, in which case they can still cut the price in the long term. 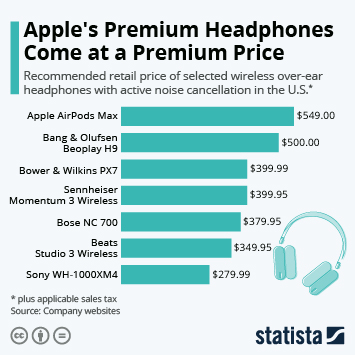