8 million tonnes of plastic ends up on the world's oceans every year but how does it get there? There are multiple ways plastic comes into direct contact with the sea including the wind, drains and illegal dumping. Rivers are the primary conduit, however, with a staggering 90 percent of all plastic waste entering the world's oceans eminating from just ten rivers.

That's according to data from “Export of Plastic Debris by Rivers into the Sea” by Christian Schmidt, Tobias Krauth, and Stephan Wagner, which was published in Environmental Science & Technology (2017) and later highlighted by UN Environment. The ten rivers in question flow through some of the world's most polluted cities, especially in Asia.

The research shows that the Chang Jiang or Yangtze River is the worst culprit, responsible for 1.47 million tonnes of plastic pollution reaching oceans each year. It has already impacted many ecosystems along the length of its 6,300 km (3,900 mi), threatening the Chinese alligator and the narrow-ridged finless porpoise. The baiji or Yangtze River Dolphin is already thought to be extinct, which would make it the first dolphin species to disappear as a direct result of human activity.

The Indus river flows through China (western Tibet), India, and Pakistan and it is named as the second worst plastic polluter on the planet, carrying 164,000 tonnes of it to the the ocean each year. China's second-longest river, the Yellow River, comes third with just over 124,000 tonnes of plastic waste transported into oceans per year. 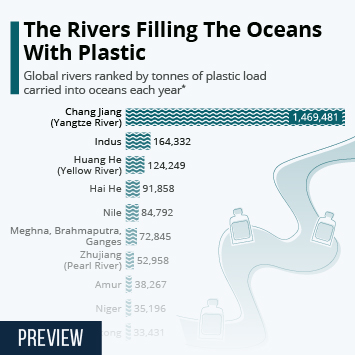 This chart ranks global rivers by tonnes of plastic load carried into oceans each year.