Deliveries by COVID-19 Vaccines Global Access – or COVAX – started up at the end of February but hit a snag after only approximately 50 million doses shipped as of May 4. The initiative has said it wanted to ship more than 250 million until the end of May.

COVAX, which aims to provide equitable access to COVID-19 vaccines, is mainly using AstraZeneca vaccine varieties produced in South Korea and India. But the latter country has halted almost all exports as a ferocious second wave of infections in the country is making domestic demand soar.

As seen in the chart that shows shipments between February 24 and May 4, COVAX deliveries that were made out of India before the sudden halt in late March were more plentiful than those coming out of South Korea. The exception is deliveries to Indonesia. Here, around 5 million doses have already arrived from contractor SK Bioscience. Still, the number makes up less than half of the allotment through May.

Among the ten biggest beneficiaries of the initiative, Nigeria, Ethiopia and the Democratic Republic of the Congo - being supplied by India - have received around 30 percent of their planned shipments In comparison, Brazil and the Philippines only received around 11 percent of the delivery pledge out of South Korea, while Egypt and Mexico received around 20 percent. All countries have received additional doses outside of COVAX, but amounts differ. Brazil has so far had access to approximately 44 million additional doses of the AstraZeneca and the Chinese SinoVac variety, which is produces locally in part (20 per 100 population). Mexico has received more than 30 million doses from various sources (24 per 100 population), both packaged and in bulk. The Philippines, on the other hand, have received only 4 million doses, mostly from China (3.6 per 100 population) on top of the COVAX allocation. Half a million doses of the Sputnik vaccine arrived from Russia recently. Egypt has received only 700,000 doses of the AstraZeneca and Sinopharm vaccines (0.7 per 100 population) as well as 900,000 doses through COVAX.

Bangladesh and Pakistan have not received any of their COVAX allotments yet. While Bangladesh has purchased 7 million doses and has been given an additional 3.3 million by its ally India (6 per 100 of population), Pakistan is not cooperating with its larger neighbor on vaccines and has received 4 million doses - purchased and donated - from China (1.8 per 100 population).

Because India is a producer and recipient under COVAX, it is treated differently by the initiative. While no definite allocation has been made, UNICEF lists 10 million doses as delivered to India under COVAX as of May 4. Eventually, the country is expected to emerge as the biggest COVAX recipient, however. 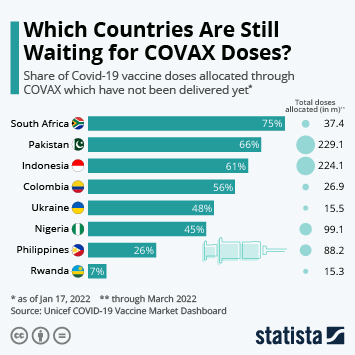 This chart shows COVID-19 vaccine doses allocated through COVAX until May and deliveries as of March 25, 2021 (in millions).