By the time the strategy was made public, the 10 percent goal had been missed by 56 countries, while 70 countries had already surpassed the 40 percent target by the end of September. In late December, the IAVG rang the alarm bells once again, saying that 98 countries were about to miss the 40 percent target, citing “the severe vaccine supply constraints to COVAX, which persisted until the last quarter of 2021” as the main reason for the shortfall.

Aside from supply constraints, which are expected to gradually ease in 2022, the IAVG identified further challenges in achieving the 70 percent coverage goal by mid-2022. “The increase in volumes will create challenges in absorption capacity in resource-poor settings. This includes the capacity to receive, store, distribute, administer, and to record vaccine use, including wastage,” the group warned, before adding that widespread misinformation fueling vaccine hesitancy will be another hurdle in achieving its immunization goal.

According to latest estimates by Our World in Data, large parts of the world are likely to fall short of the WHO’s vaccination target. Looking at current coverage and the rate of new vaccinations over the past 14 days, the researchers find that 122 countries are currently on a trajectory to miss the 70 percent vaccination goal by the end of June 2022, while 34 countries are on track to meet the target. Meanwhile most high-income countries have already surpassed the 70 percent milestone, further illustrating the wide gulf in global vaccine distribution. 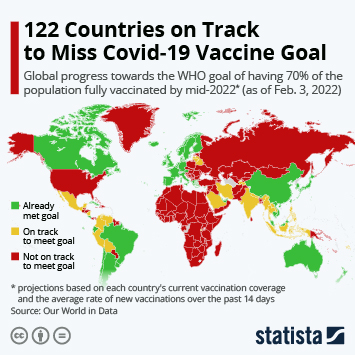 This chart shows the global progress towards the WHO goal of having 70% of the population fully vaccinated by mid-2022.