The United States is getting ready to up its vaccine exports, albeit only after its domestic demand has been largely saturated. President Joe Biden said 20 million doses of the Moderna, Pfizer and Johnson & Johnson vaccines would be shared with other countries. The country has also pledged to export 60 million doses of the AstraZeneca variety, but since it has not been approved for U.S. use yet, a safety review is delaying the handout.

Data from Airfinity shows that the U.S. has so far only exported 3 million vaccine doses, equal to around 1 percent of its production. Other places have shared much more of their domestically produced supply, for example China (42 percent exported), India (35 percent exported) and the EU (28 percent exported).

South Korea, which is producing AstraZeneca vaccines that are used in the global COVAX initiative, and is also procuring its own vaccine supply through the scheme, has even exported 90 percent of its domestically produced vaccine stock.

Similar to the U.S., the UK has exported hardly any locally produced vaccines while importing millions of doses from the EU, resulting in a swift vaccination campaign in the country. This led to a tug-of-war over vaccine supply between the two actors. Fears were voiced that an introduction of a vaccine ban by the EU could prove a dangerous step in the direction of "vaccine nationalism"

Nevertheless, the EU is set to continue being one of the most generous vaccine producers so far and its new export policy is aimed at proportionality and reciprocity. That will involve recipient countries being examined to determine whether their epidemiological situation and vaccine campaigns are better or worse than the EU's as well as whether they have restrictions in place on their own exports of vaccines and associated raw materials. 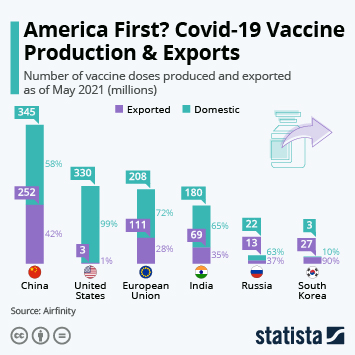 This chart shows the number of vaccine doses produced and exported as of March 2021.