Amazon was the last of the big five U.S. tech companies to report its earnings for the three months ended June 2021 on Thursday. And like the other four GAFAM companies before it, Amazon reported another record-breaking quarter, despite falling just short of Wall Street expectation in terms of sales and Q3 guidance.

The e-commerce behemoth saw net sales grow 27 percent to $113 billion in the past three months, partly offsetting a slowdown in its core e-commerce business with strong growth in its cloud and advertising segments. While CFO Brian Olsavsky was quick to point out that the slowdown in year-over-year growth was mostly due to unusually strong results caused by lockdowns in Q2 2020, Amazon's shares still tumbled following the announcement.

While Facebook and Apple also offered modest guidance this week, warning investors that the blockbuster growth rates achieved over the past 15 months couldn't be sustained forever, there were little signs of weakness in big tech's Q2 results.

The entire GAFAM group, namely Google, Apple, Facebook, Amazon and Microsoft, saw profits surge in the June quarter, as “Big Tech” continues to profit from the pandemic’s stimulating effect on online advertising, e-commerce and consumer spending. As the following chart shows, each of the five companies crushed their previous record for second quarter profit, with Apple, Alphabet and Facebook almost doubling their previous best. 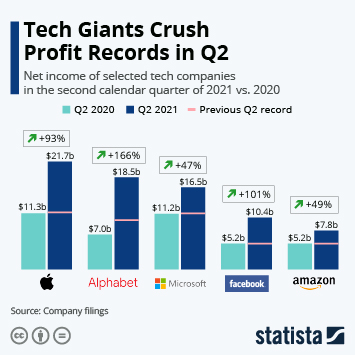 This chart shows net income of selected tech companies in the second quarter of 2021 vs. 2020.

Digital video and TV in the UK