Climate change, rising sea levels and flooding are expected to have an outsized impact on Asia where millions of people live on low-lying land in close proximity to the ocean. A new report by Greenpeace East Asia looks at the risks in seven regional cities, concluding that in these metropolises alone, more than 15 million people could be affected by rising sea levels and flooding by 2030.

While problems surrounding the sinking of Indonesian capital Jakarta have been well known, the report actually puts Bangkok at the top of the most affected cities. Greenpeace expects more than ten million people will be at risk in the Thai capital if a ten-year flood occurred at 2030 sea levels, jeopardizing 96 percent of the city’s GDP - more than $500 billion calculated at purchasing power parity.

The economic risk is also higher in Filipino capital Manila, where 87 percent of GDP ($39.2 billion) and around 1.5 million people would be at risk in 2030 during such an event, which is defined as a flood which has a 1:10 chance of occurring in any given year in the respective location.

Like in Jakarta, The City of Manila’s excessive groundwater extraction is causing it to sink by 10 cm annually, according to numbers cited by Greenpeace. The maximum subsidence of Jakarta is put at 25 cm per year by the report - a figure which has earned it the title of fastest sinking city in the world. Yet, the problems are concentrated at Jakarta's North shore. In the event of a ten-year flood in 2030, just 17 percent of the city could flood, according to the report, as opposed to large swaths of Bangkok and Manila.

Jakarta’s problems are expected to put 1.8 million at risk, causing a potential GDP loss of 18 percent ($68.2 billion). Nevertheless, the Indonesian government has repeatedly stated its desire to move the country’s capital to a purpose-built location in the East Kalimantan region on the island of Borneo. While officials have cited the desire to balance the country’s economic growth better as a reason, observers believe environmental concerns also play a role.

Out of the East Asian cities in the report, Taipei and Tokyo are expected to be most at risk. 24 percent of Taipei’s GDP could be lost fewer than ten years down the line, as many locations close to the Tamsui river would be at grave risk of flooding in the city. As many as 830,000 could be affected in densely populated Tokyo even though only 4 percent of the city would be flooded under the given scenario.

The report did not take into account the effect of levees or seawalls some cities have built or could be building until 2030, which could minimize the flood risk. Greenpeace said that structures existed or were under construction in Tokyo and Jakarta, but data wasn't sufficient to incorporate them into the report's modelling. The rise of sea levels by 2030 was calculated in line with the planet warming by 3-4 degrees Celsius by 2100. 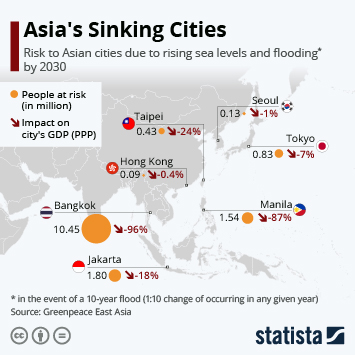 This chart shows the risk to Asian cities in the event of a 10-year flood occurring and due to rising sea levels by 2030.