The reversal of vaccine strategies in several Asian countries has raised questions about a Chinese-manufactured COVID shot, Sinovac. Experts however still agree that the vaccine has made a valuable contribution in preventing serious illness, hospitalization and death from the coronavirus in the countries in which it was used.

Malaysia and Thailand announced this month that they were phasing out the vaccine. While the former will switch to Pfizer and give out its remaining Chinese shots as second immunizations, the latter is going one step further by offering mix and match vaccines with AstraZeneca to those which are still awaiting their second Sinovac shot. Both Thailand and Indonesia have said they will offer a third booster shot to those who have received the Sinovac vaccine. Both will use a different vaccine than Sinovac for this program. Singapore meanwhile does not count Sinovac recipients – many of them healthcare workers - in vaccination statistics anymore and does not exempt them from being tested, for example when attending events.

In Asia and elsewhere, Sinovac and other Chinese-made vaccines were available earlier than those developed in Europe and the U.S., leading to frontline workers and older populations receiving the shot at a time when the West was accused of hording their vaccines. Nevertheless, the shot which was labeled 50 percent effective at preventing infection but 100 percent effective at preventing hospitalization and death, has been able to lessen the coronavirus burden, according to experts.

In wanting to stop the transmission of the virus entirely and overcome the pandemic, experts view mRNA vaccines like Pfizer or Moderna as better suited at 90 percent effectiveness against infection, explaining the reversal happening in Asian countries now. Additionally, there are no studies yet on the effectiveness of Sinovac or other Chinese vaccines against COVID-19 variants.

Sinovac has been widely used in Asia and countries like Cambodia and the Philippines are sticking to it so far despite some protests. Sinovac and another Chinese vaccine, Sinopharm, are also in use in South America, Mexico and the Middle East. Several countries in Africa have also authorized one or more Chinese shots, according to Our World in Data. 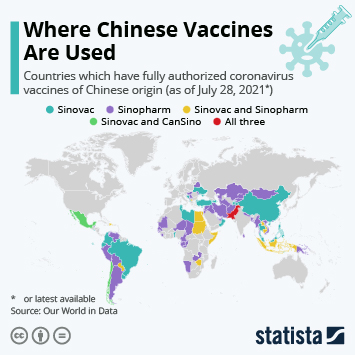 This chart shows the countries which have fully authorized coronavirus vaccines of Chinese origin (as of July 28, 2021).