Division on Capitol Hill might be centering around the debt ceiling and the bipartisan spending bill of $1.2 trillion at the moment, but the elephant in the room remains the Democrats’ massive $3.5 trillion proposal – also dubbed the human infrastructure bill.

On Thursday, progressives in the Democratic Party withdrew support for the smaller, physical infrastructure deal of $1.2 trillion, which was supposed to have bipartisan support. While Democrats have been preparing to pass the larger package through budget reconciliation on a party line vote, the Progressive Caucus is worried moderates within their own party will turn into a threat for the proposal. Democratic moderates Kyrsten Sinema (D-AZ) and Joe Manchin (D-WV) emerged as the most vocal critics of the Build Back Better agenda. Progressive Caucus chair Pramila Jayapal (WA-07) on Thursday instructed members to vote “no” if the $1.2 trillion bill would come up to a vote in the House, which it didn’t.

Senator Bernie Sanders (I-VT) said that while he wanted to see the infrastructure bill passed, it was also “absolutely imperative” that the larger reconciliation package would succeed, as it would, according to Sanders, approach bigger problems like the needs of working families and the threat of climate change.

Tax cuts for those Americans making less than $400,000 per year are part of the biggest budget item in the current $3.5 trillion proposal, which earmarks $1.8 trillion for the Finance Committee, also promising to lower prices for prescription drugs. Clean energy spending as such only totals $265 billion to the Committees of Energy and Natural Resources as well as Environment and Public Works. However, being one of the main themes of the Biden administration’s agenda, investment to combat climate change is also included throughout the bill’s other items, for example in drought and wildfire mitigation – filed under agriculture -, sustainable housing or green transportation. 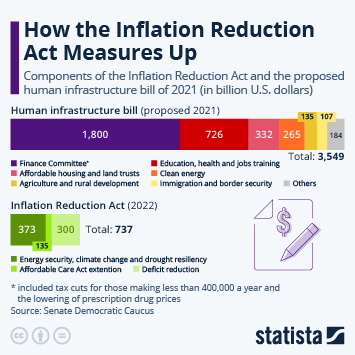 This chart shows the components of the Democratic Party's human infrastructure proposal (in billion U.S. dollars).