With "Red (Taylor's Version)" based on her fourth studio album "Red" released in 2012, Taylor Swift released the second reimagined version of an older record to critical acclaim on November 12. The album is not only loved by critics but by fans as well: Her ten-minute song "All Too Well" shot to number 1 of the Billboard Hot 100 Charts in the week after release. With this feat, Swift broke a record held since 1972, as our chart shows.

On January 15 of that year, Don MacLean's classic "American Pie" rose to first place on the weekly Billboard charts. While the popularity of the track was to be expected thanks to its gratuitous nods towards U.S. pop culture and music history, its length was not: At 8:37, it was a far cry from the classic three-minute pop song formula and had to be split into two parts on its vinyl single release in December 1971, robbing the artist of the chance to include a B-side as was common back in those days. MacLean, when asked about Swift breaking his record by Billboard, was graceful about it: "Let’s face it, nobody ever wants to lose that #1 spot, but if I had to lose it to somebody, I sure am glad it was another great singer/songwriter such as Taylor."

Other famous musicians tried over the years, but never really came close. Whether it was "We Are The World", The Eagles' "Hotel California" or Michael Jackson's "Don't Stop 'Til You Get Enough", most of the longest songs in Billboard history clocked in at around six minutes. While Swift's climb to the top with such an unwieldy song is commendable, it still has to be put into perspective. Contrary to what some critics claim, this feat is not a sign of the comeback of long-form musical expression, but rather indicative of Swift's globe-spanning loyal fanbase that resorted to a bit of trickery to get the job done: The 54.4 million U.S. streams necessary to push Swift to the top also include the five-minute, clean, acoustic and "Sad Girl Autumn" versions of the song. 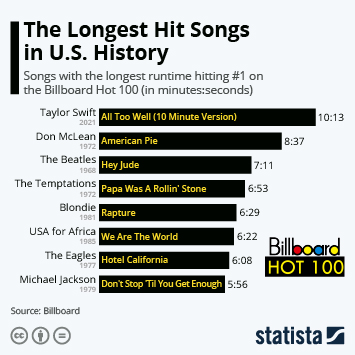 This chart shows the songs with the longest runtime hitting #1 on the Billboard Hot 100.