The rising price of the U.S. dollar against the euro and the world’s other strongest currencies is one of the most significant economic events of 2022 so far. The strengthening of the U.S. currency is due, in large part, to the marked increase in the interest rate adopted by the United States Federal Reserve at the start of the year, with the aim of curbing inflation. A higher interest rate in the U.S. helps attract investors to the dollar thanks to its increased profitability. As more people buy dollars, the demand for the currency grows, strengthening it in the process.

This leads to both positive and negative repercussions at an international level. Emerging economies tend to be particularly affected by this process, since the weakening of their currencies makes imported goods more expensive, pushing up inflation rates domestically and making it harder to pay back foreign debt. In addition to this, in countries including those in Latin America, these international conditions are layering on top of pre-existing internal factors that contribute to devaluation. For example, the issue of the emission or ‘creation’ of money by central banks, or also indirectly by commercial banks, as well as the population’s potentially low confidence in the local currency, which leads to people exchanging their savings into foreign currencies.

If we compare the currency denominations of the six main economies in the region, we see that the currencies of Argentina, Chile and Colombia have suffered the greatest devaluations against the U.S. dollar since the start of 2022. Taking the first price of the year (from January 3) as a reference point, the Argentine peso has seen the greatest loss in value in regard to the U.S. currency. The closing price on July 20, 2022 indicates that the Argentine currency has seen a drop of more than 20 percent compared to its value on January 3, according to data from Yahoo! Finance. The Chilean peso, however, was trading eight percent lower against the dollar on July 20, although it came close to losing 19 percent of its value on July 18 and 19. Meanwhile, the Colombian currency has lost almost six percent of its value compared to the U.S. currency, although it also recorded a double-digit loss in the second week of July.

In the first half of the year, the Mexican peso remained within a range of five percent appreciation or depreciation with respect to the dollar, with a decrease in its value of just 0.1 percent by July 20. To date, both the Brazilian real and the Peruvian sol have not lost ground against the dollar but have gained in value, both up around three percent. 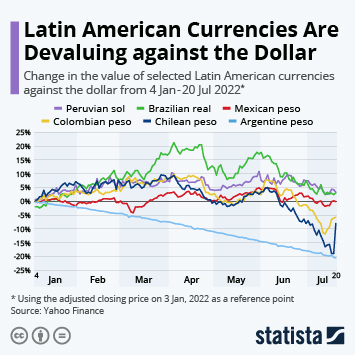 This chart shows the change in value of Latin American currencies over time in 2022.