Following the acquisition of subscription-based digital sports publisher The Athletic for $550 million, the New York Times has added another asset to its growing set of digital products, albeit a much smaller one. On Monday, the Times Company announced the addition of Wordle to its game portfolio. The popular word puzzle game, that grew its audience from tens to millions of daily players in just three months, was acquired for an undisclosed amount in the low seven figures.

“If you’re like me, you probably wake up every morning thinking about Wordle, and savoring those precious moments of discovery, surprise and accomplishment,” Jonathan Knight, general manager for The New York Times Games, said in the announcement of the deal. “We could not be more thrilled to become the new home and proud stewards of this magical game, and are honored to help bring Josh Wardle’s cherished creation to more solvers in the months ahead.”

The free-to-play game will remain free after moving to the New York Times, which was likely a key requirement for the game’s creator to agree to the deal. “I’ve long admired The Times’s approach to the quality of their games and the respect with which they treat their players. Their values are aligned with mine on these matters and I’m thrilled that they will be stewards of the game moving forward,” Wardle said. While a free Wordle probably won’t move the needle in terms of subscribers, the addition of The Athletic with more than a million subscribers certainly will.

As the following chart shows, the Times’ digital products have accumulated more than 7.5 million subscribers since the company introduced a paywall in 2011. Digital news subscriptions, incl. packages that include all digital products, accounted for 5.7 million of that total, while standalone subscriptions to the Times’ Games, Cooking, Audio and Wirecutter products added another 1.9 million subs. 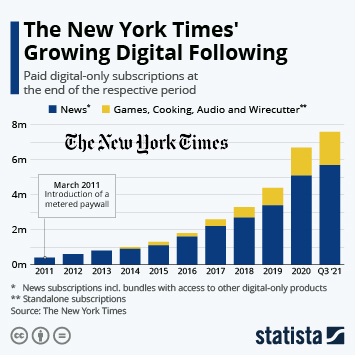 This chart shows the number of paid digital-only subscribers of The New York Times.