40k
57k
41k
9.6k
As the political discussions and disagreements continue, so does the influx of refugees to Greece and other countries on the edges of Europe. At a summit in Brussels today, the President of the European Council Donald Tusk proposed an EU endorsement of border closures on the route to the north of Greece. A draft statement read:

"Irregular flows of migrants along the Western Balkans route are coming to an end; this route is now closed."

While certain key figures, among them German Chancellor Angela Merkel, are supposedly disputing the use of the word 'closed', the thousands of refugees attempting to make the journey out of Greece in the direction of Northern Europe are certainly meeting strong resistance. Regional officials stated on Sunday that Macedonia has stopped allowing people in, leaving 14,000 people stranded. Despite the dire situation, 126,166 arrived in Greece from January 1 to March 2, exacerbating the humanitarian crisis further.

In January, 96 refugees died while 34 were reported missing. Among those able to survive the treacherous sea crossings are increasingly more minors. In June 2015, 16 percent of arrivals were children. In February that share had risen to 40 percent, meaning children were outnumbering men for the first time.

The longer Europe fails to come to a consensus on a solution, the worse the situation is going to get.

This infographic was recently featured on The Week. 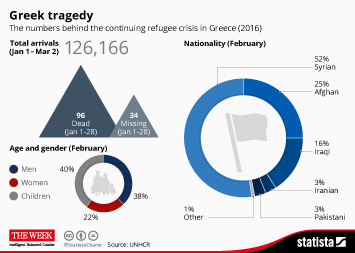 This chart shows the numbers behind the continuing refugee crisis in Greece.