88.9k
For a video gaming platform to be successful, it is absolutely crucial to be backed by the developing community. After all, what good is the best hardware if the best games are made for other platforms? A survey conducted by UBM, the company behind the annual Game Developers Conference, shines a light on which platforms developers are currently considering the most important and which ones they are working on.

Unsurprisingly, the PC remains the frontrunner with respect to developer support. 66 percent of the roughly 4,000 developers surveyed are currently working on a game that will be released on PCs. Moreover, 60 percent of the respondents consider PCs one of the most interesting gaming platforms. Slightly less popular than PCs, the PlayStation 4 remains a top priority for developers as well. 38 percent of the respondents consider Sony’s bestseller one of the most interesting platforms for 2019 and 31 percent are currently working on PlayStation games. Nintendo’s popular new hybrid console, the Switch, is also enjoying a lot of developer interest this year, beating even the aforementioned PlayStation 4. However, probably due to its smaller installed base, fewer developers are already working on games for the Switch.

Looking beyond "traditional" platforms, i.e. PCs and consoles, mobile devices are taken more and more seriously in terms of being fully-fledged gaming devices. 38 percent of the respondents are currently working on mobile games and 33 percent consider it one of the most exciting platforms to work on in 2019. In light of the huge installed base and the relatively low effort involved in making smartphone games, it’s understandable that developers try to capitalize on that opportunity. 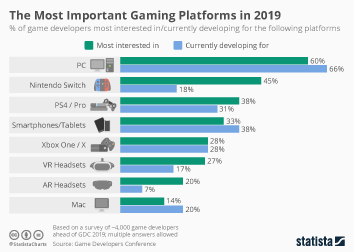 This chart shows which gaming platforms are currently getting the most support from game developers.