U.S. intelligence services are due to deliver a groundbreaking report on "unidentified aerial phenomena" to Congress next month at a time when close encounters between UFOs and U.S. Navy fighter jets are sending chills through the country. Compiled by the secretary of defense and the director of national intelligence, the report is set to declassify Pentagon knowledge about unexplained aerial objects. UFO encounters and sightings have frequently been dismissed for a range of reasons such as attention-seeking behavior or the misinterpretation of logical events. Encounters between some of America's top fighter pilots and mysterious objects that have been tracked by sophisticated sensors are now generating real attention.

Three videos have emerged from the targeting pods of U.S. Navy Super Hornets that were taken in 2004 and 2015, revealing strange sphere-shaped objects travelling at speed through the sky. Former Navy fighter pilot David Fravor and Lieutenant Commander Alex Dietrich were interviewed on "60 Minutes" this week about their encounter with one of the strange objects off the San Diego coast in 2004. They, along with two other pilots onboard the jets, observed an area of roiling whitewater in the middle of the calm ocean. "We saw this little white Tic Tac-looking object. And it's just kind of moving above the whitewater area", Fravor said before adding that "it gets right in front of me and just disappears".

It was tracked by the advanced radar suite onboard the guided missle cruiser USS Princeton which acquired it 60 miles away after a matter of seconds. Both aviators could not provide a logical explanation of that they saw and Fravor said "there's definitely something out there that was better than our airplane". Ahead of the report being published, National Intelligence Director John Ratcliffe told Fox News in March that "there have been sightings all over the world". Elaborating, he said that "when we talk about sightings, the other thing I will tell you, it's not just a pilot or satellite or some intelligence collection. Usually, we have multiple sensors that are picking up these things".

Considering the buzz the upcoming report and the interview made this week, how have global UFO sightings been developing in recent years? There is a National UFO Reporting Center in the United States which documents sightings of unexplained aerial phenomena all over the world and interestingly, sightings are picking up again. While there was a dip in 2018, there were more than 6,000 in 2019 and over 7,000 last year. So far in 2021, there have been close to a thousand up to the middle of May. While such numbers might have previously been ignored, encounters with UFOs involving radar tracking and advanced sensor imagery from experienced and trustworthy pilots are lending them more credibility. 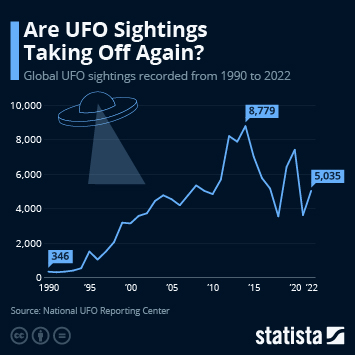 This chart shows global UFO sightings recorded from 1990 to 2020.