Beliefs and conspiracy theories in the U.S. - Statistics & Facts

Published by Statista Research Department, Aug 13, 2019
Many superstitions persist in American society. The number of people who believe in ghosts in the United States only decreases slightly in adulthood. Roughly a quarter fewer Canadians believe in spirits, given the framing that they might have unfinished business on Earth. Themes related to witchcraft, wizardry, and magic make a fifth of Americans so uncomfortable that they want to ban such books in libraries for primary and secondary school students.
Outside the realm of the supernatural, such beliefs tend to take the moniker “conspiracy theories” . As the name suggests, these are hypotheses that officials are covering up “what really happened”. Some beliefs are political, such as the alleged use of chemtrails to control the population or the supposition that a “deep state”, a shadow government, is actively working against Trump and his supporters. Others focus on debunking widely accepted science: Over a fifth of Americans still believe the conspiracy theory that climate change is a hoax, while over a tenth insist that the moon landing was faked, including so-called “Flat Earthers” who deny that the Earth is a sphere.

Many of these beliefs are generally harmless. Whether or not Lee Harvey Oswald acted alone is more or less a moot point. However, the ability to spread ideas through the internet without fact-checking has given rise to a crisis of fake news. Coined by the Trump administration, Americans have been using this term inflationarily, accusing traditional and online outlets of publishing fake news. Some people also spread fake election stories on Facebook which are easily disproved; according to one survey, roughly one third of respondents had knowingly shared such questionable political news, news that turned out to be made up, online.

The 2016 presidential election brought the topic of fake news to the forefront, with each side accusing non-flattering stories as “fake”. This has diminished trust in traditional major news sources, caused an increased level of confusion among Americans, and ultimately led to questions about the election itself. This, in turn, erodes trust in the stability of democracy in the United States. Naturally, as time passes and the untrue stories evolve, some will grow into conspiracy theories themselves, to be debated along with the Illuminati.

In the following 5 chapters, you will quickly find the 34 most important statistics relating to "Beliefs and conspiracy theories in the U.S.".

Christianity in the U.S. 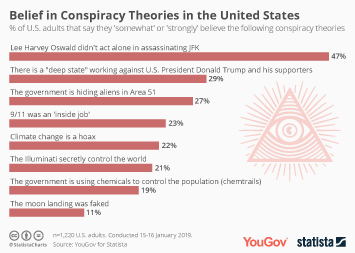 Belief in Conspiracy Theories in the United States