Skip to main content
53k
74.6k
87k
88.9k
Since it first entered service with the Soviet army in 1948, the AK-47 and its derivatives have become the world's most widely used assault rifles. In his book "AK47: The Story of The People's Gun", author Michael Hodges estimates that there are as many as 200 million Kalashnikov rifles in circulation, one for every 35 people on earth. Its popularity among soldiers, criminals and militants is primarily due to its cheap price, durability, reliability and sheer simplicity.

200 different types of Kalashnikov are produced in at least 30 countries with vast quantities of rifles turning up in trouble spots all over world, especially in Africa. The AK rifles used in the Paris attacks at Charlie Hebdo and the Bataclan theater were purchased in Belgium and traced back to the Balkans (and to Serbia in particular). Given that the AK-47 is at the center of the illegal ams trade (worth an estimated $1.7 to $3.5 billion every year), how much would one cost on the black market?

A recent report from Global Financial Integrity has shed light on the cost of an illegally-procured AK-47 in several selected countries. Somebody seeking one in Pakistan could pay $148 for a locally produced version or $1,200 for the real deal. In Belgium, where the Paris attackers obtained their guns, an AK-47 has an average pricetag of $1,135. It's also possible to find AK-type rifles through the darknet and they can cost anywhere from $2,800 to $3,600. 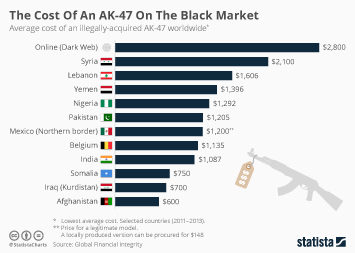 This chart shows the average cost of an illegally-acquired AK-47 worldwide.