40k
57k
41k
9.6k
After months of negotiations between Italy's government and the European Central Bank (ECB), the ECB last Friday declared the bankruptcy of Veneto Banca and Banca Popolare di Vicenza, two key banks in the industrial heartland in the north-east of Italy. It leaves the eurozone's third-largest economy with another test of the stability of its financial system after the problems of Banca Monte dei Paschi di Siena. It raises the question whether banks in Europe are resilient enough to cope with downturns in the economy or the financial markets.

Since the financial crisis, European banks have focused on stability and risk management. Indeed, the risk management approach was prioritized by 70 percent of senior bankers surveyed in 2016. Results from the latest stress test of the European Banking Authority (EBA), however, were mixed. Of the 51 banks tested, Italy’s Banca Monte dei Paschi di Siena had its entire capital base wiped out under the imaginary scenario of a big drop in economic growth. The UK's Barclays, Europe's fifth leading bank when it comes to total assets, on the other hand, did not drop below the legal minimum of 4.5 percent capital ratios, but did score lower than expected and well below the European average.

After an emergency cabinet meeting on Sunday, Italian ministers agreed to a decree splitting the two banks of the Veneto region into ‘good’ and ‘bad’ banks. Intesa Sanpaolo will acquire the 'good' assets, with the Italian government handing about 5 billion euros to Intesa as part of the deal. Additionally, 12 billion euros in state guarantees are to be provided to cover potential losses at the 'bad' assets. Total costs: 17 billion euros. Time will tell if Italy, and Europe as a whole, will fail or pass this latest test. 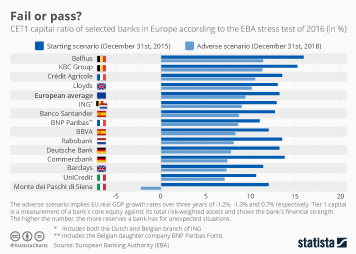