Published by Statista Research Department, Jul 21, 2022
Since the global financial crisis, the financial condition of the banking sector has become a hot topic in the European public debate. Stable, strong banks are important both in good economic times as well as in bad ones. In good times, they help to finance enterprises which, in turn, drive economic growth and provide employment. In bad times, unstable banks can pose a threat to the integrity of the financial system and damage the economy. Every other year, the European Banking Authority (EBA) conducts a solvency stress test among large European banks to assess their resilience to a financial crisis. During the 2021 stress test, the EBA found that most European banks had enough capital to withstand a financial crisis.

Which is the largest bank in Europe?

As of December 2021, the London-headquartered HSBC was the largest bank in Europe in terms of total assets, with assets worth more than 2.95 trillion U.S. dollars. BNP Paribas and Credit Agricole ranked second and third, both with over 2.6 trillion U.S. dollars in total assets. That year, HSBC also had the most valuable banking brand and the largest market capitalization in Europe, confirming its leading position in the European banking industry. However, other European banks were more profitable than HSBC in 2022. That year, the Swiss-based UBS Group had the highest return on equity (ROE) among the largest European banks. HSBC ranked 13th, with a ROE of roughly 4.3 percent.

The growing popularity of online banking

The overall number of banks and credit institutions in the European Union decreased to approximately 5,260 in 2021, from over 8,500 in 2008. Likewise, the number of bank branches in Europe decreased steadily since 2008. The decline in branches is frequently linked with the growing popularity of online and mobile banking, which allow customers to conduct banking operations remotely. As of 2021, Norway was the European country with the largest online banking penetration rate, at 96 percent.

In the following 5 chapters, you will quickly find the 27 most important statistics relating to "Banking sector in Europe".

The most important key figures provide you with a compact summary of the topic of "Banking sector in Europe" and take you straight to the corresponding statistics.

Banking in the Netherlands 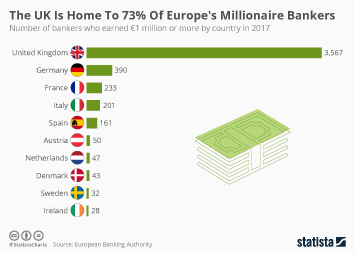 bankers who earned one million or more 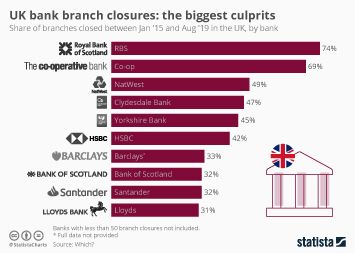