The cryptocurrency market in Indonesia has grown significantly in recent years, reaching 11.2 million registered cryptocurrency investors at the end of 2021. Given that Indonesia has a population of 270 million people and a high digital commerce penetration rate, there is still a lot of room for expansion in the country's financial sector, particularly in the blockchain sector.

The Cryptocurrency Adoption Index placed Indonesia 20th out of 146 nations in 2022. Indonesia outperformed most other countries in terms of retail service value for both centralized and decentralized finance (DeFi) value. This confirms that Indonesians are embracing digital payment trends. Moreover, the popularity of cryptocurrencies among Indonesian investors as a new source of income was also impacted by the positive trends in the global cryptocurrency market. Another major contributing factor to the cryptocurrency success in the nation is their mobile-first strategy with easily accessible apps. With Indonesia’s internet and smartphone penetration rate standing at 69.8 percent and 67 percent, respectively, in 2020, it is also no wonder that there is more traction from the country’s mobile-heavy user base.

As an emerging market, many investors are beginners in financial investments and are more vulnerable to questionable exchanges and assets. It was reported that Indonesia contributed 11 percent of total victims to cryptocurrency scams in 2019, the second highest in the world. Hence, Indonesia’s central bank, Bank Indonesia, has been holding talks on cybersecurity-related matters concerning digital currency to educate Indonesian investors.

The Indonesian government, through Indonesia's Commodity Futures Trading Regulatory Agency (BAPPEBTI), which regulates crypto trading in the country, and the Director General of Taxes, is currently considering imposing taxes on cryptocurrency trading in the future. In the next few years, Indonesia is also planning to introduce its central bank digital currency (CBDC), which utilizes blockchain technology. These plans, however, can be a countermove against cryptocurrency, which has been growing rapidly in the country. This might discourage investors from choosing cryptocurrency as an investment avenue and delay the mass adoption of cryptocurrency assets in Indonesia. Nevertheless, a study found more than 60 percent of Indonesian respondents agree with the notion that cryptocurrency is the future of money and that its value will get higher in the future. With the growing trend in the number of transactions, traders, and exchanges in the past years, Indonesia’s cryptocurrency market will possibly expand in 2022 and beyond.
This text provides general information. Statista assumes no liability for the information given being complete or correct. Due to varying update cycles, statistics can display more up-to-date data than referenced in the text.
Published by Statista Research Department, Oct 20, 2022

Bitcoin transaction value in Indonesia as of the first half of 2021
24.42tr IDR 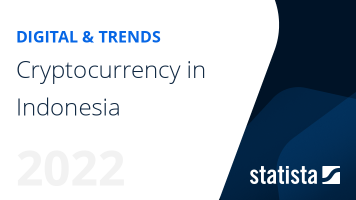 The most important key figures provide you with a compact summary of the topic of "Cryptocurrency in Indonesia" and take you straight to the corresponding statistics.