Published by Statista Research Department, Jun 29, 2021
The United States is well known for many of their cultural exports, such as Hollywood, many of which have added to the enormous soft power and influence the country possesses globally. However, the strength of the United States’ economy has had a more formidable role in the transition to, and sustenance of, their position as “leader of the free world”. Adopting part of that oft recited phrase, at the heart of this rise has been the promotion of a liberal capitalist system characterized by free-trade.
The expansion of trade allowed the economy of the United States, and many other countries, to thrive. Large export industries were established, taking advantage of the technological and manufacturing abilities present within the economy. Interestingly, manufacturing continues to fill the primary position in regards to the composition of U.S. exports. This is in contrast to the mainstream economic consensus that services will fill this position in high wage economies, while manufactured goods will be imported from economies where wage costs are lower. Moreover, the percentage of exported manufactured goods that are high-technology exports has also fallen since the turn of the century.

This is of concern for policy makers as it illustrates the reliance of the economy on low skilled manufacturing. The issue being that American manufacturing companies will compete in industries where they may often be priced out of the market by overseas manufacturers. This phenomenon was highly cited by President Donald Trump’s presidential campaign as his demands for renegotiated trade deals held appeal among workers and areas reliant on the manufacturing sector. Trump’s removal of the United States from the Trans-Pacific Partnership Agreement, and other trade agreements, did not seem to compliment this motivation. His successor President Biden, claims plans to address these issues.

Nonetheless, exports from the United States have grown in recent years. In 2019, exports were valued at 11.73 percent of GDP compared with levels of less than 10 percent in the early 2000s. Although China is long out of reach, the United States continues to occupy second place in the countries with the highest exports in terms of dollar value worldwide.

In the following 4 chapters, you will quickly find the 31 most important statistics relating to "U.S. exports".

Statistics on the topic
Exports from the U.S.
1.75tr USD
Total value of international U.S. exports of goods and services
2.56tr USD
U.S. exports as a percentage of GDP
10.13%

The most important key figures provide you with a compact summary of the topic of "U.S. exports" and take you straight to the corresponding statistics. 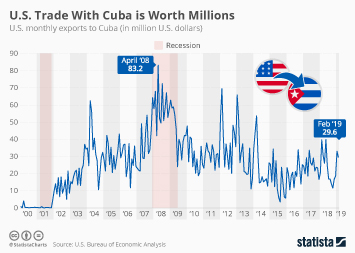 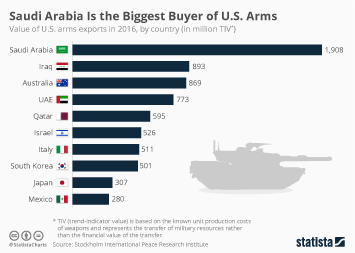 Saudi Arabia Is the Biggest Buyer of U.S. Arms