Published by N. Sönnichsen, Sep 7, 2020
The United States is a net exporter of energy. 2019 was the first year in a half century that the U.S. produced more energy than it consumed and was able to export greater volumes of primary energy than it needed to import. This is the result of increased domestic oil and natural gas production as well as greater use of renewables, and a decline in primary energy demand. Energy consumption came to 94.65 exajoules in 2019.
Nevertheless, the U.S. is still one of the leading importers of crude oil – the largest source of primary energy. Proponents of energy independence argue for the need to explore the country’s untapped domestic oil reserves as well as removing limitations on oil exploration in the Gulf of Mexico, the Arctic, and the Outer Continental Shelf. However, environmental and economic concerns are strong contenders against increasing oil production and exploration.

As a result of increased domestic production, petroleum imports into the U.S. fell to an estimated low of 9.1 million barrels per day in 2019. The majority of petroleum supplied came from Canada, while OPEC countries only accounted for a daily import volume of 1.6 million barrels.

Apart from pipelines connecting the U.S. to its neighbors, it also has multiple transmission links to both Canada and Mexico. In 2018, the U.S. imported 58.26 terawatt hours of electricity.

In the following 6 chapters, you will quickly find the 25 most important statistics relating to "Energy imports in the U.S.".

The most important key figures provide you with a compact summary of the topic of "Energy imports in the U.S." and take you straight to the corresponding statistics.

Renewables and other fuels 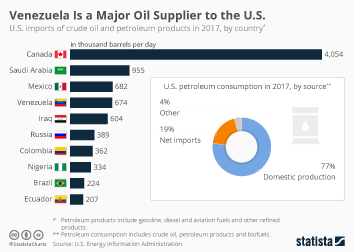 U.S. imports of crude oil and petroleum products in 2017