Published by Statista Research Department, Sep 30, 2022
As the world's largest importer, import goods are play a key role in the U.S. economy and in the lives of everyday Americans. U.S. imports were valued at over three trillion U.S. dollars in 2021, the highest value since 2000. While this substantial number of imports helps to keep consumer costs low, there is a long-standing debate in the U.S. around free-trade and the perception that increased trade has pushed jobs abroad.

The United States conducts a lot of its import trade with its closest neighbors, Mexico, and Canada. Despite a trade war waged by former president Donald Trump, the country's biggest import partner remains China. Chinese imports declined to 434 billion U.S. dollars in 2020 but rose again in 2021. In that year, imports from China to the U.S. were predominantly pharmaceutical preparations, due to the COVID-19 pandemic.

Even though the U.S. has the capability to produce all the goods and services that it needs, emerging markets such as China and Mexico are able to produce the same goods for less. Given lower costs of living, companies can pay workers less, and the goods can be sold in the U.S. more cheaply and are better suited to providing products that American consumers are willing to buy - this is an economic concept known as comparative advantage.

Domestically, imports are viewed in a negative light by those exposed to the economic pressures of competition in a globalized market. This includes producers of those goods and services and their employees. Critics of globalization point to the movement of manufacturing jobs from the U.S. to cheaper markets in less developed countries - although efforts have been made to re-shore jobs to the states. In certain cases, it can be that a town or even an entire city is reliant on the economic activity provided by that industry. One such example is the struggles of Detroit at a time when transport equipment is one of the biggest import industries in America in terms of dollar value. Due to labor and capital constraints many people are left without jobs or the customers on whose patronage they once relied.

In the following 4 chapters, you will quickly find the 29 most important statistics relating to "U.S. imports".

The most important key figures provide you with a compact summary of the topic of "U.S. imports" and take you straight to the corresponding statistics. 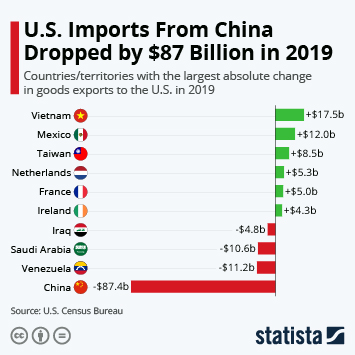